So I found No Nest for the Wicket by Donna Andrews in the Barnes & Noble bargain bin. 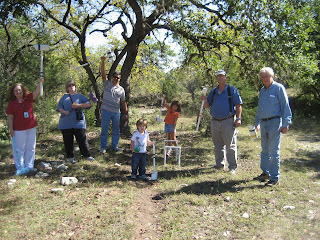 I can’t say that I recommend the book (a mediocre murder mystery), but the premise is fantastic and introduced me to a new sport: eXtreme Croquet.

Forget the gloves and manicured green lawns of traditional croquet. The rougher the eXtreme course, the better. In fact, eXtreme Croquet courses include hills and valleys, pits and chips, even sand and water. Some courses cover such a vast area that walkie-talkies are needed to know whose turn it is. eXtreme mallets look like something Beowulf might have used to combat Grendel, and depending on the muscle playing, wickets are made of PVC or metal pipe. Even 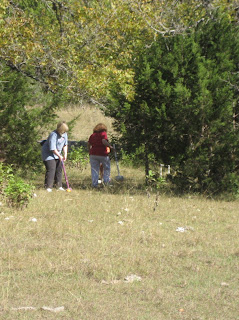 better, eXtreme Croquet veterans recommend having extra balls handy (no, not like that) because traditional balls tend to shatter when they are impaled on a boulder or drop from lobbed heights. You can see why the game sounds tempting, right?

Fortunately, I belong to a gaming family (not in a gambling debt sort of way, they’re just game for a game). I explained the idea. They hopped on board and we planned the first of what might be many eXtreme Croquet days.

Since Dad loves his power tools, he quickly devised a way to make the mallets using 4x4 fence posts and closet dowels. We ordered a box of balls from croquet.com and chose an unruly section of Texas hillside for our course. PVC wickets were placed as inconveniently as possible—among cedar trees or rutted out cow paths—in a 9 wicket diamond formation.

Fun was had by most (sadly, it took me a dozen tries to clear the second wicket, so I spent the game hopelessly behind). I am happy to report that no snakes were hiding in 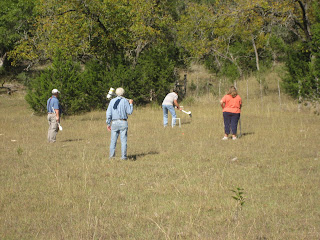 the tall grass, that no ticks attacked from cedar groves, and that cow patties were the scariest obstacles to avoid. The definite highlight of the game was when a roqueted player cleared a 4 foot embankment and miraculously got back on course.

Since the eXtreme course is eXtremely big, games take an eXtremely long time (we planned for two hours and should have planned for four), but next time we’re thinking of donning headlamps and playing a four hour game at sunset!
Posted by Green-eyed Blogster at 12:24 PM